Jennifer Cline worked for years as a graphic artist and returned to her first love watercolours, 25 years ago. She studied with Chinkok Tan at the Ontario College of Art and Design and is self-taught since then, expanding her technique and style.

She painted extensively in The Beach area, Ward’s Island and Cabbagetown. She also traveled to Greece, England, Colombia and the South of France always painting on-site. Her paintings have culminated in nine successful shows at The Beacher Café. 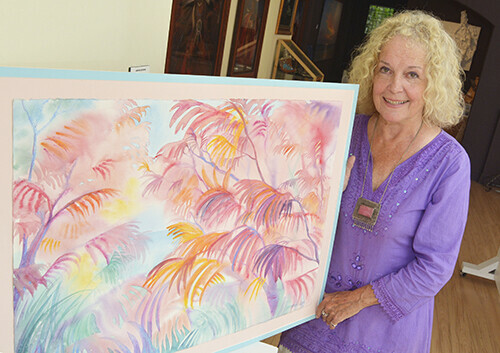 Jennifer Cline attended the Ontario College of Art and Design in the Advertising Design course on the Eagle Pencil Company Scholarship, one of only two handed out yearly in Canada. She has worked in graphic design and illustration for Cockfield Brown Agency, Eaton’s and The Bay and freelanced successfully for 15 years.